Looking forward to the new website  and newsletter which should preview the first of August. It just takes a lot of time to move all the material to the new site.
In the meantime, here is an update on upcoming classes.

Fall Retreat   September 26/27/28. 2014
We are thrilled that the talented Laura Taylor is coming to teach us for three days. Learn about interpreting a canvas on the first day , then work with Laura on your canvas. She will help you choose wonderful  threads and stitches.
There are a couple of spots left in this class . You will enjoy the boutique hotel, Gainey Suites which is steps from shops , restaurants and a spa.

Vicky DeAngelis is coming! How exciting is this.  Come have fun on  Halloween and let Vicky work with you. Have an area on your canvas that you just cannot decide what to do-let Vicky solve that dilemma.
She has come up with unique stitches and threads for these fans. Choose your favorite or stitch all three. 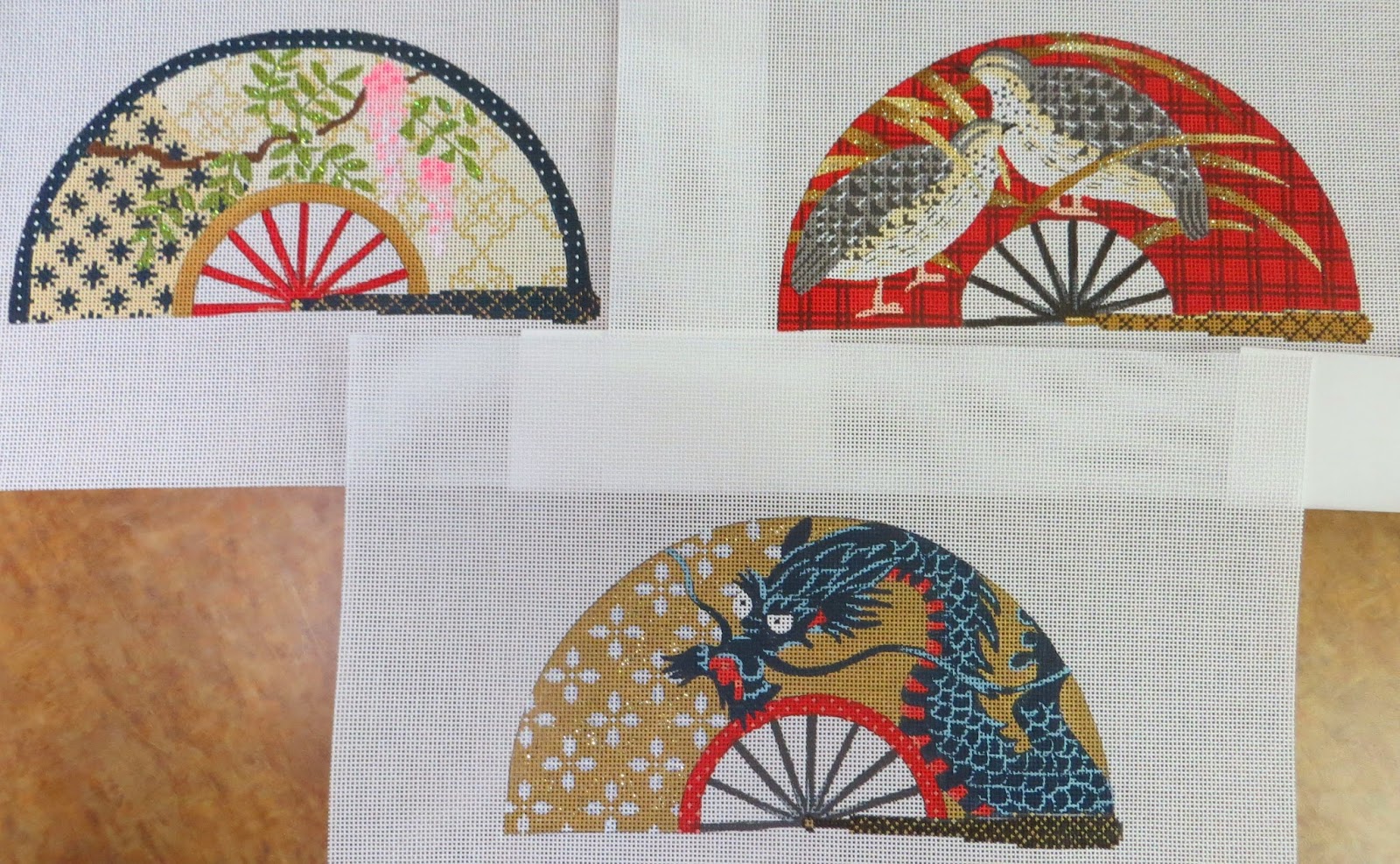 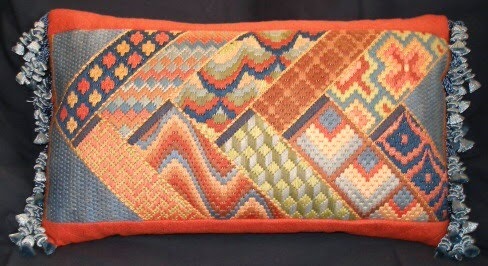 Chose your own colors for this class with national teacher extraordinaire Terry Dryden-isn't that great!  My colors will be french blues and yellows, what will yours be?
Design size is 7x 11" on 13 mesh or you can chose 18 mesh

.  "Zentangle is simple to understand and easy to enjoy — even if you are convinced you are not an artist. With Zentangle, you can always explore new areas of experience and insight." Come join this unique class and let your inner artist shine! 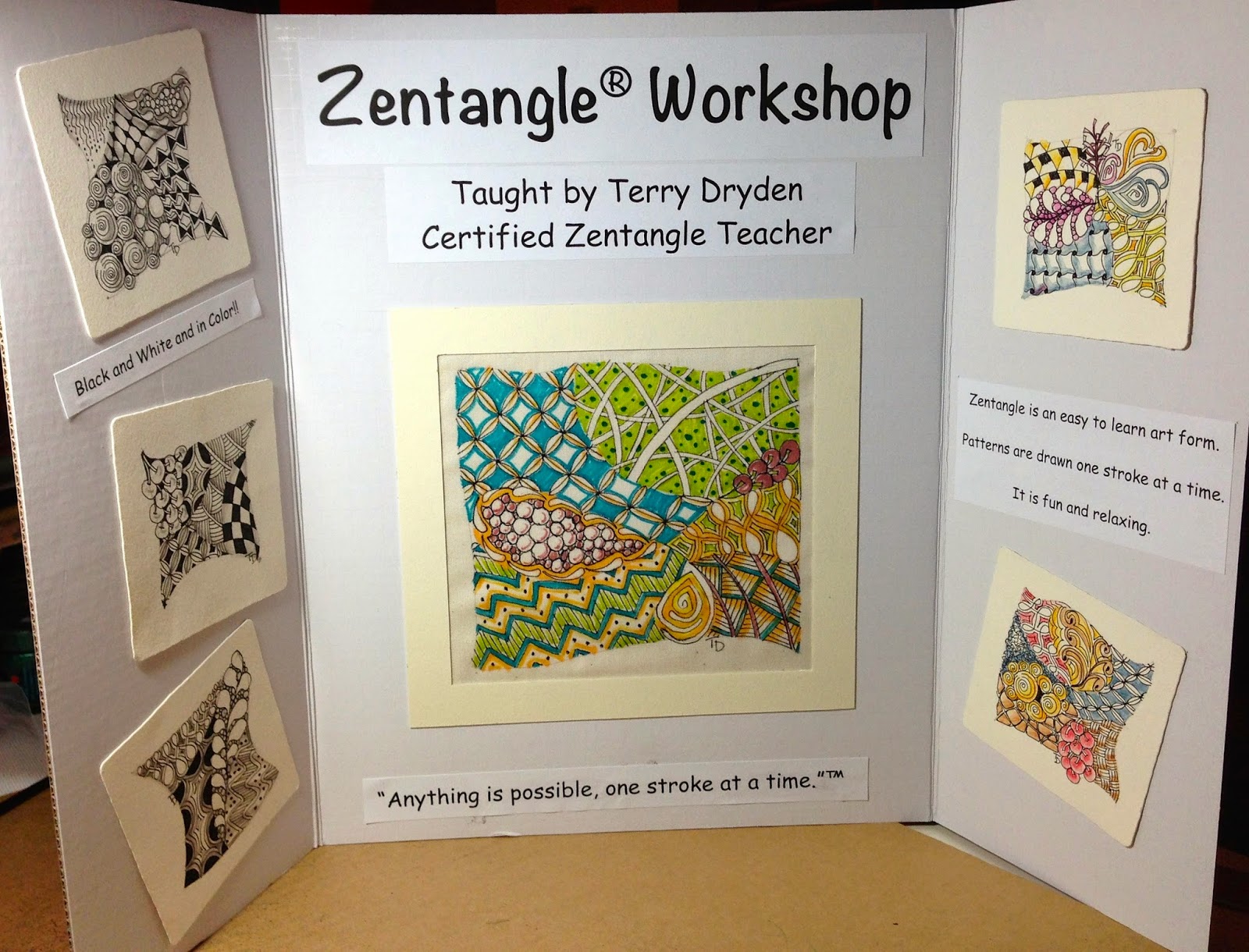 Our Japanese Embroidery and Beading class is here so please stop in to see what we are all working on in class. Here is a collage of projects- a fan, beaded purse project, metal work , and Mary Alice's fun and colorful current project. The class is on through Monday at 5pm so see you soon! 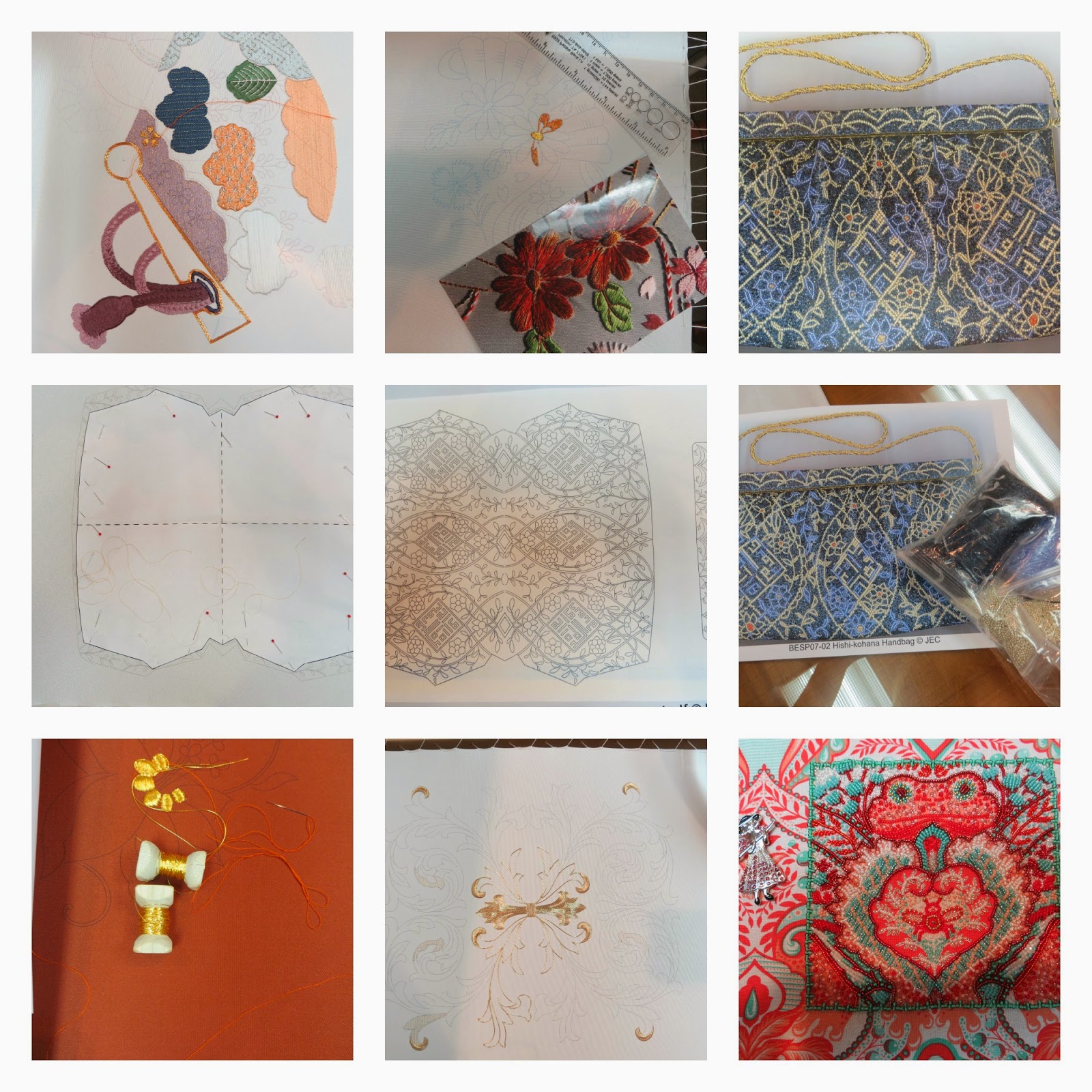 Looking for a new counted projects . Here are two to tempt you! 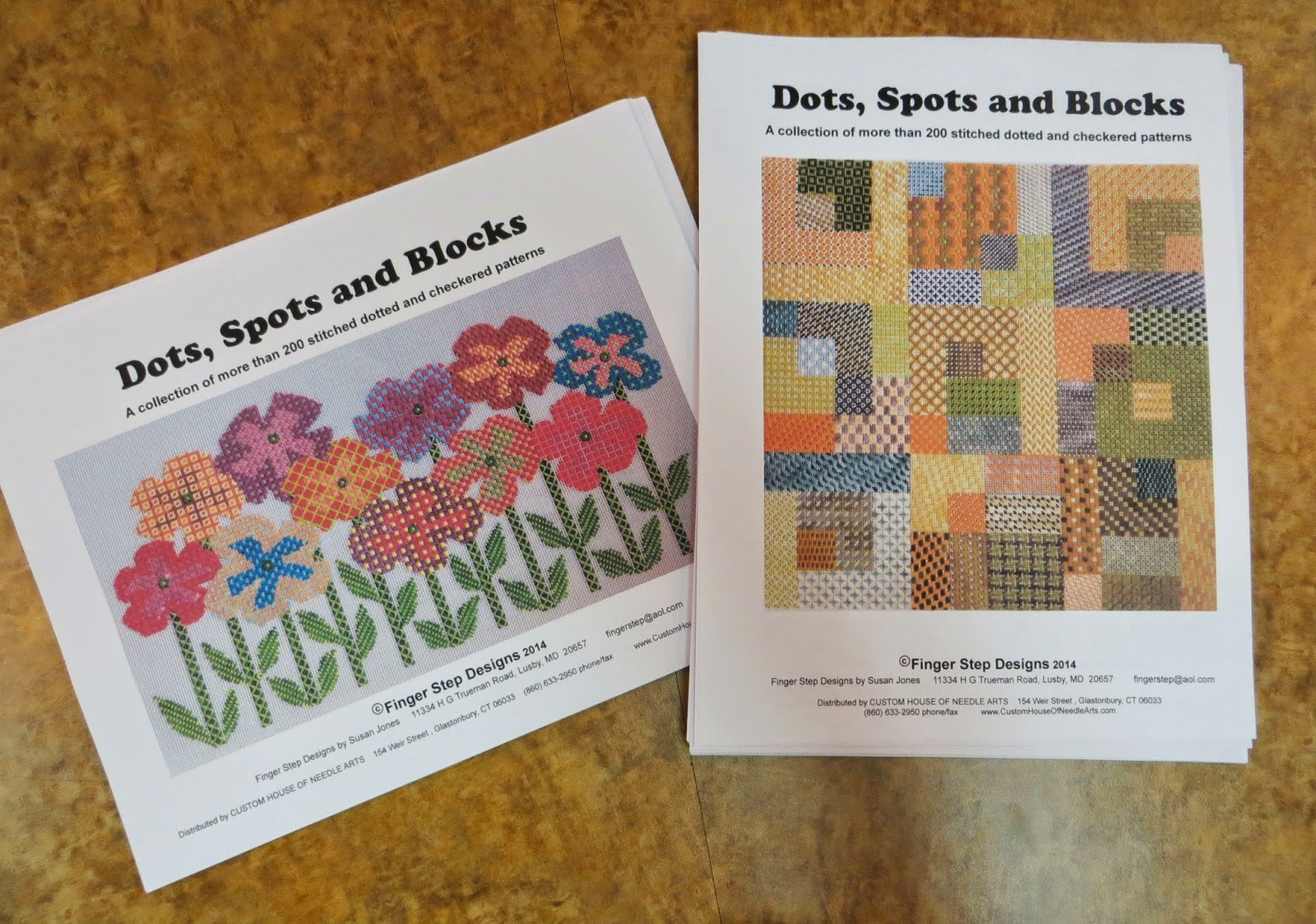 Dots, Spots and Blocks shows many ways to create "dotted" effects using stitches, threads and color placement. It is a collection of stitch patterns that will create a visual pattern that mimics "dots', "spots" and "blocks". The 26 pages in this package contain project instructions and 222 stitch patterns. So many uses for these stitches on your projects. 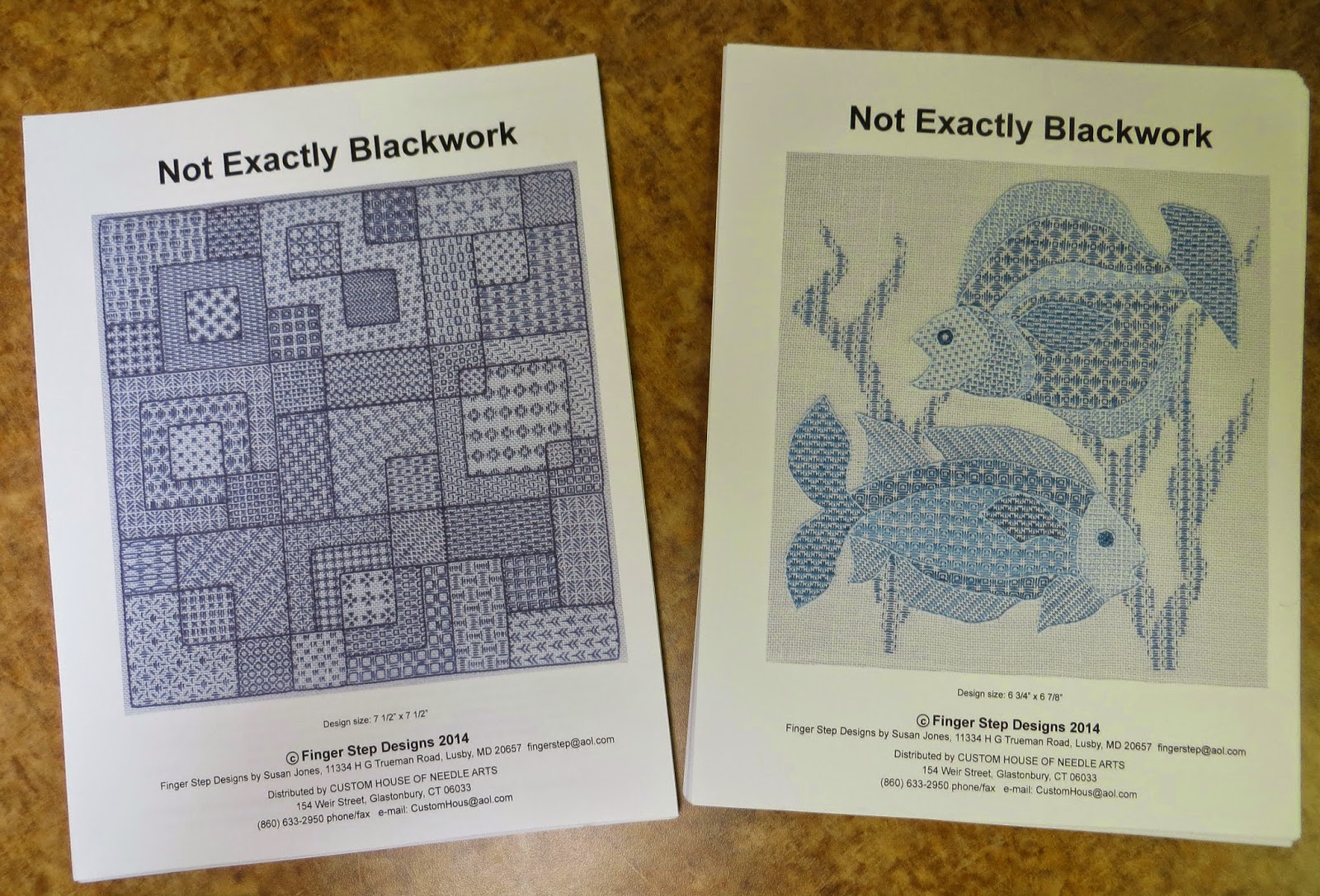 Another choice is Not Exactly Blackwork.Blackwork Embroidery is an embroidery technique originally used to decorate clothes and bed linens. It was meant to imitate lace where lace would have been too expensive or impractical. Today, Blackwork is mostly used as fills in counted thread designs where outlined areas are given texture and density, or as shapes and shadings in their own right. The stitches in this "Not Exactly Blackwork" project pack are mostly inspired by needlepoint stitches. Some are used almost as their original with only changes in spacing. Other counted thread stitches are used in new and interesting groups. Although Blackwork is traditionally a counted thread on fabric technique, the author/designer has effectively used it on needlepoint canvas also. So many uses as well for this stitches.
Posted by Unknown at 7:00 AM No comments:

One of the many great things that happened this week was a talented stitcher, Penny Boswinkle
contacting me  about a Quail Run Design she has stitched and will be exhibiting . 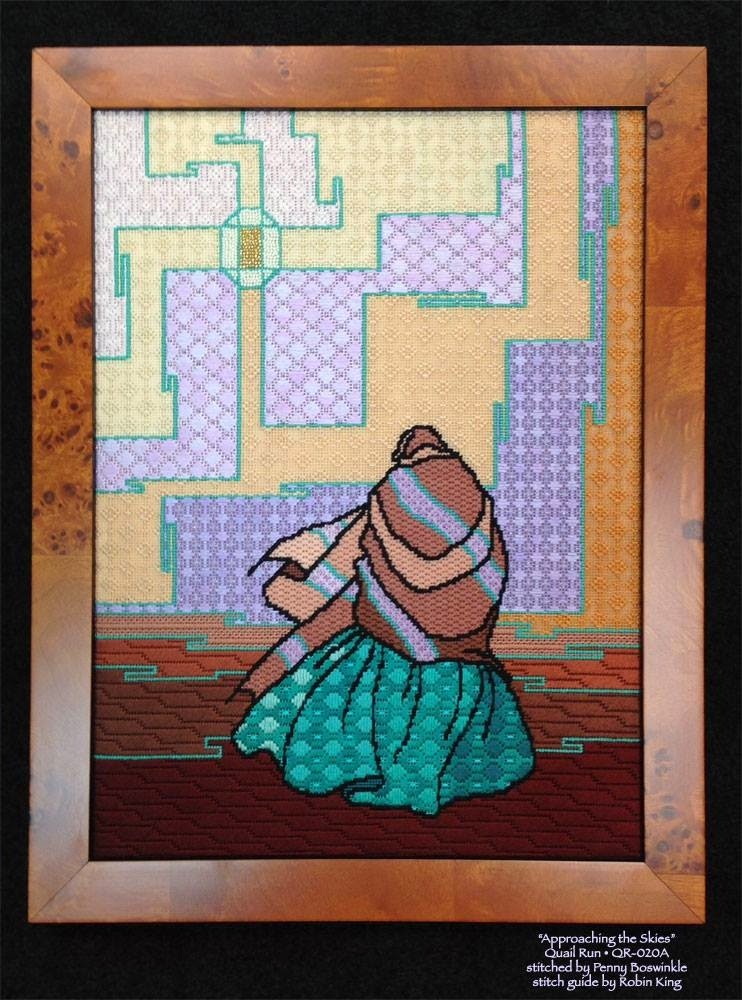 An accomplished stitcher , Penny  worked on this piece at The Nimble Needle, Atlanta  with talented Robin King who wrote the fabulous stitch guide.  The texture and dimensions are wonderful. The over all  result is just so pleasing to the eye. I, like you, will be cheering for Penny as she exhibits this piece.
The name of this piece is "Approaching the Skies" and here is the link to these designs

Our current trunk show has colorful geometrics, unique holiday designs and southwest designs. Here is one of my favorites. Here is the  trunk show link :  Dream House Ventures Trunk Show 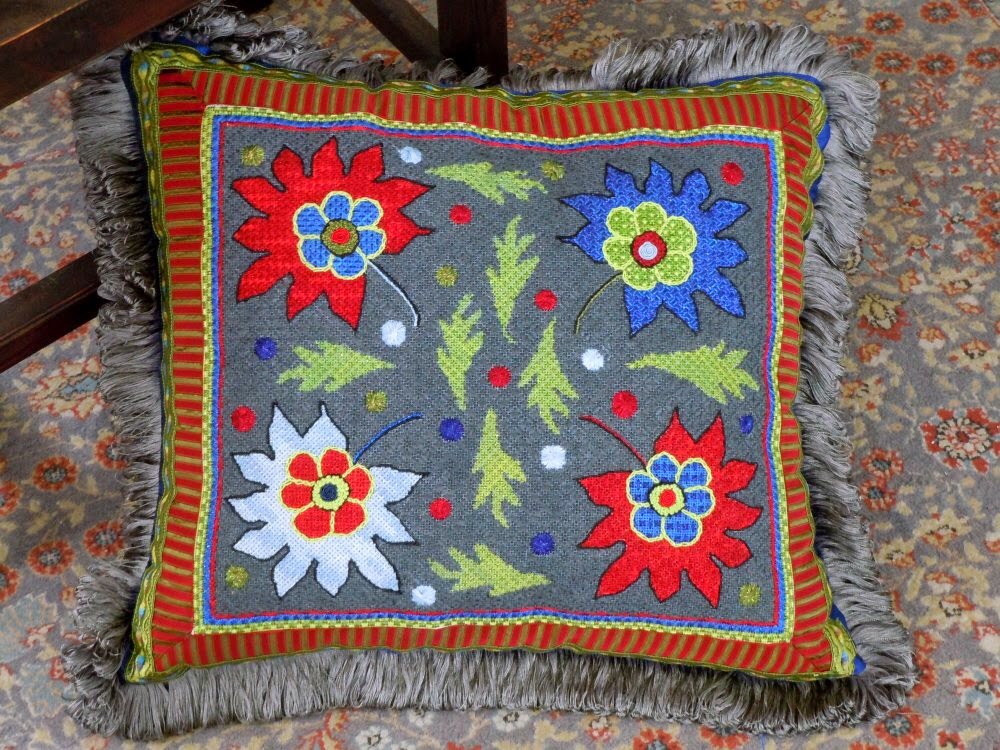 Happy stitching and have a wonderful day.
Susan

It is already over 100 degrees here in Arizona which means our part time residents have left for cooler places. This is the time of year I get to take a breath and dig into all the things that I could not get to during  our busy winter season. I am working on this canvas will be finished as a fun banner. I found some great embellishments to complete which I am keeping as a surprise when you see the finished item. 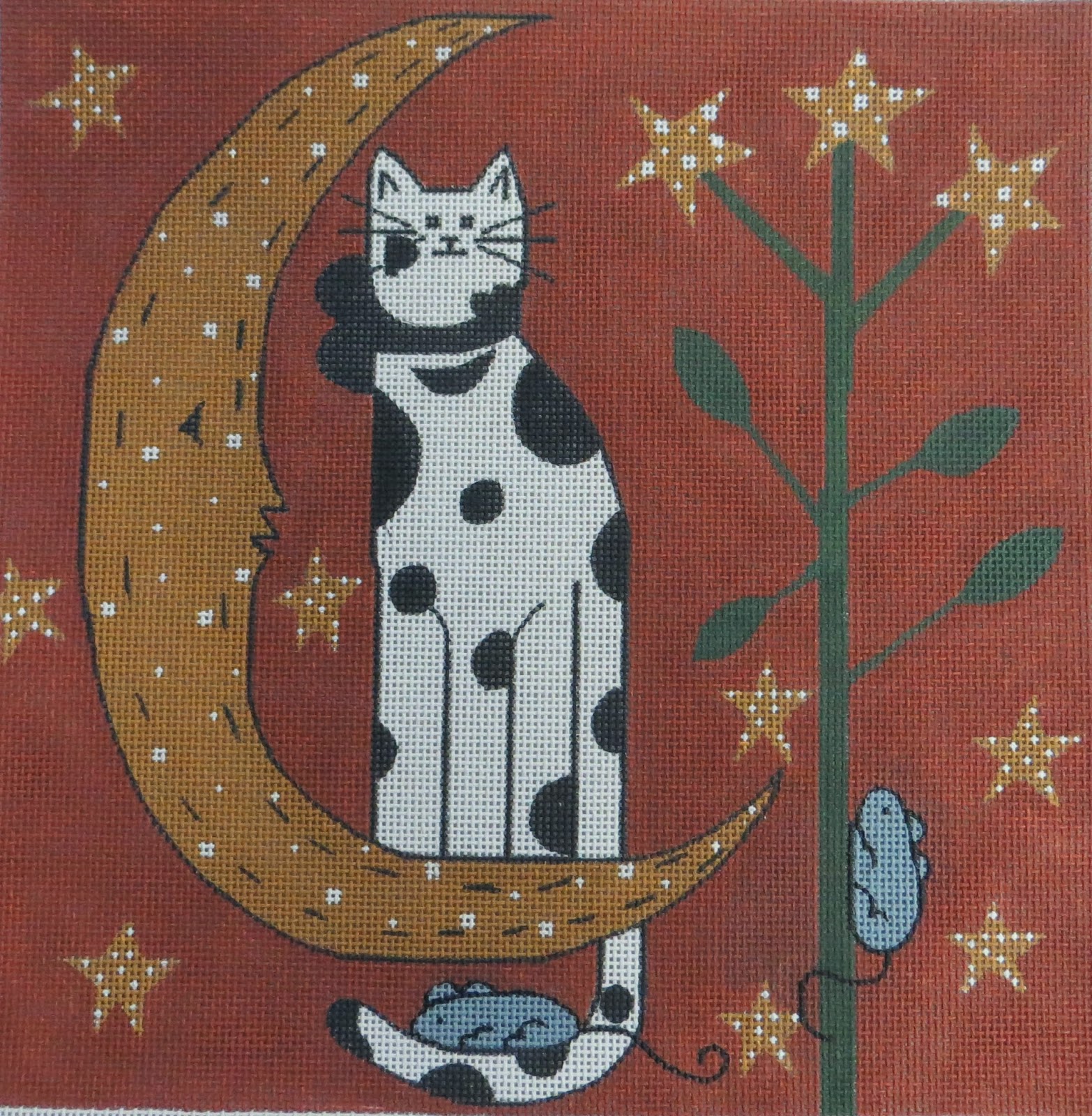 The Covey  was sent our last week but just in case you missed this issue about classes  click here.
Talented Laura Taylor will teach at our Fall Retreat. For all of you who have questions about stitch guides, Laura will start with a class to answer all your questions.  Then two great days of working on your chosen project with Laura along with fun with friends, old and new!  The boutique hotel, The Gainey Suites is steps away from shopping, restaurants , a wonderful spa and only 5 minutes from Quail Run Needlework. I am having fun with all the details so do not miss this! Call the shop to sign up.

We are all proud of our stitching family and so  I was proud to feature Elaine Bleakney's new book in The Covey . Her parents , Lynn and Walt winter in Arizona and their visits to the shop are much enjoyed and appreciated.

Here are the latest magnets into the shop so call or stop in to add to your collection. 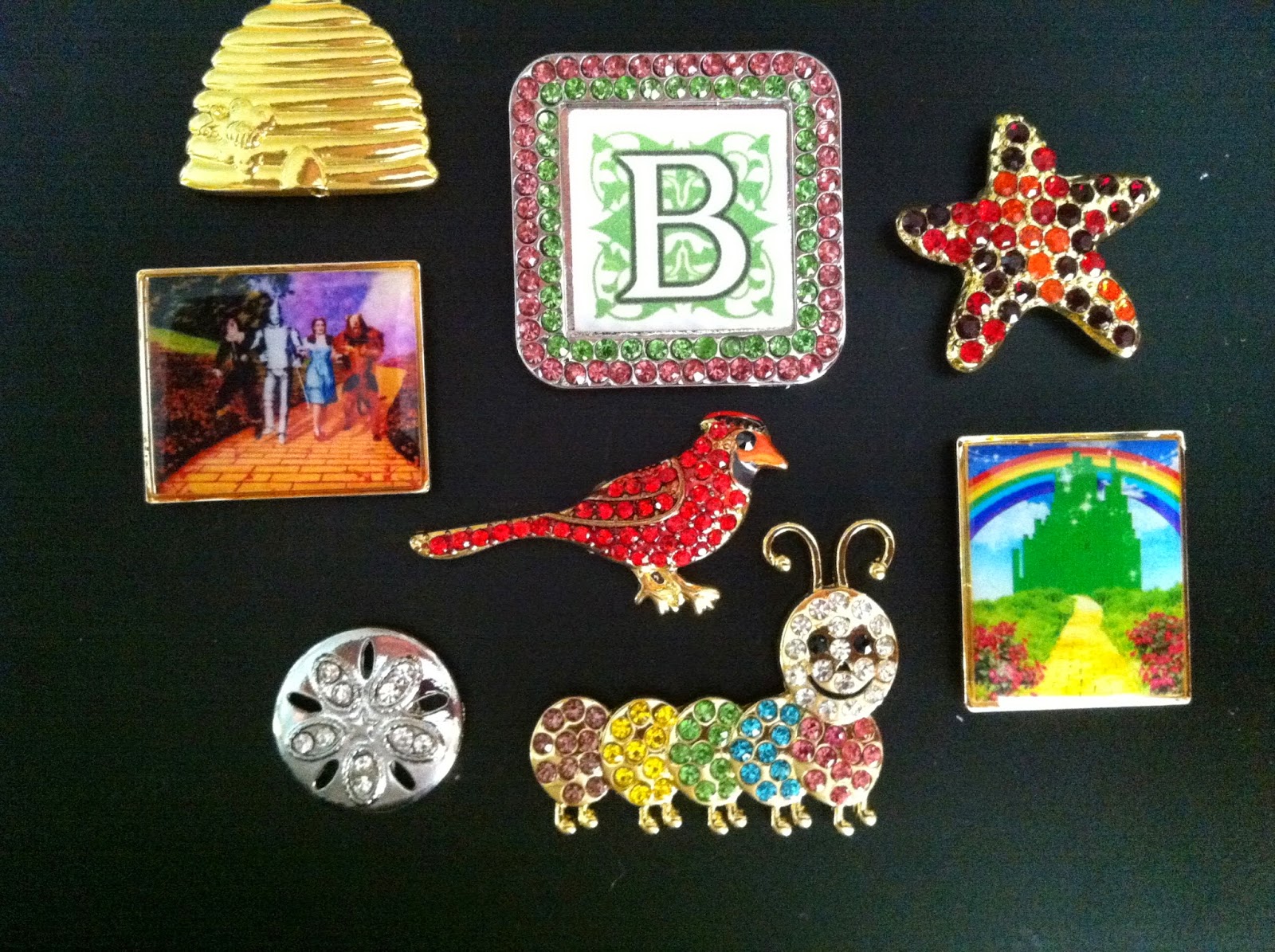 Enjoy the evening and stitching. See you soon. 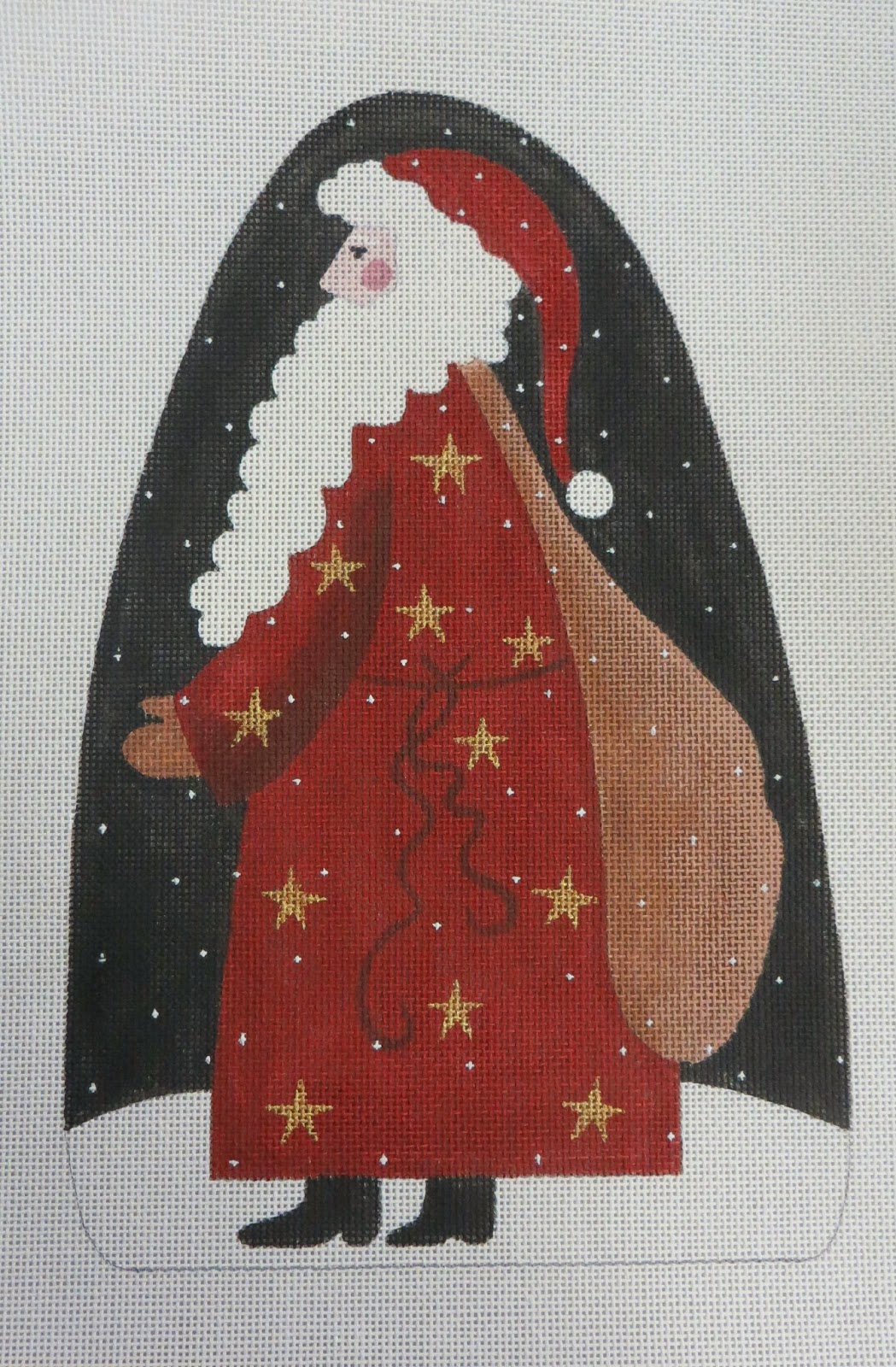 I have many new Quail Run Designs in the works. Here are three of the Patriotic club designs for you to preview. They can be finished on a garland, a wreath or just hang individually . 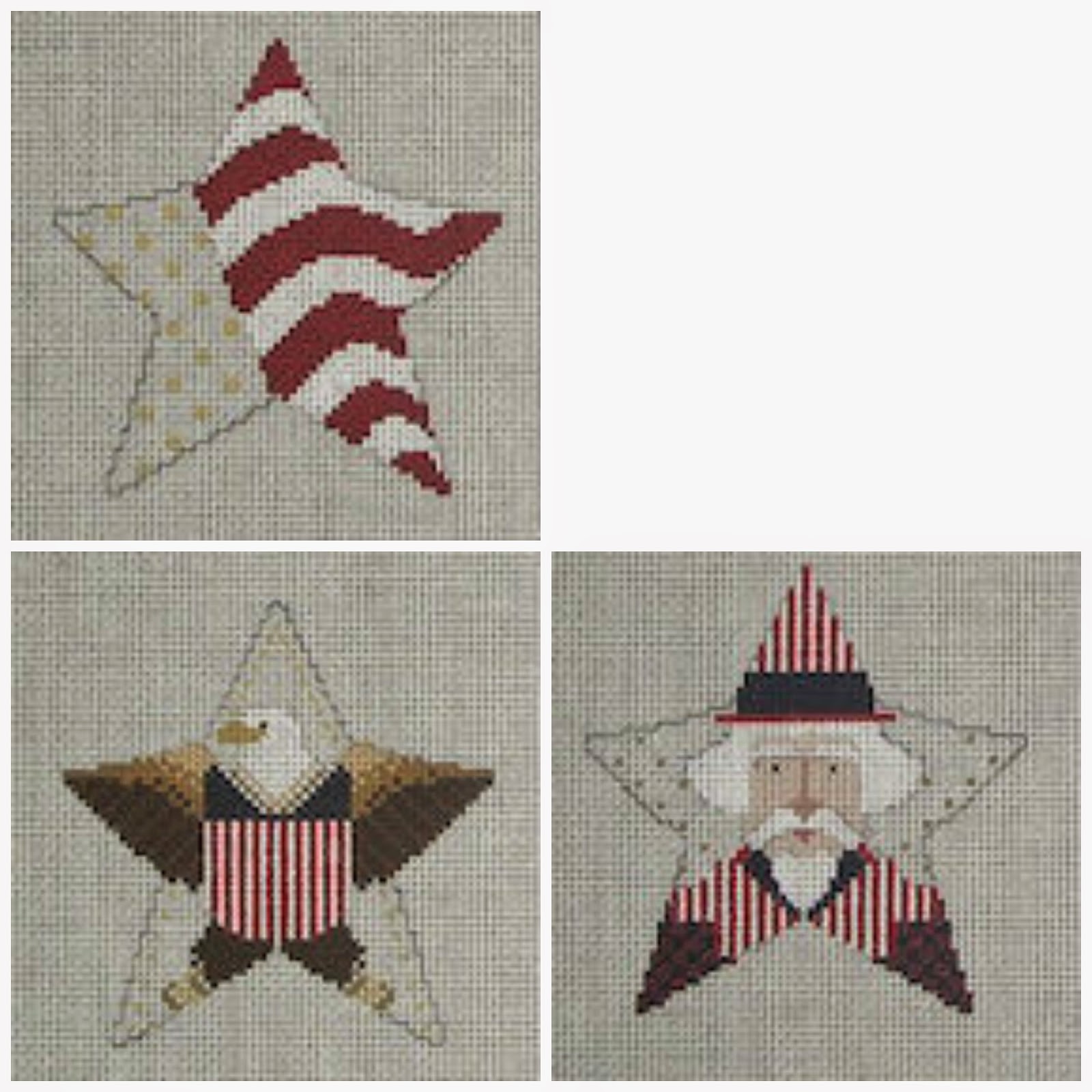 I am just about finishing stitching the Santa above and will finish it as a stand up . Look for it on display at the shop. It would be a great addition to your Santa collection. There are new items coming in from market. Of course Rainbow gallery has new colors in several of their thread lines. 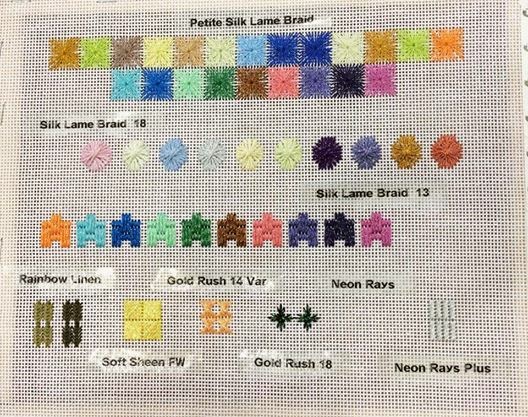 Also coming to the shop is Russian Braid as well as some more colors of the Silk wrapped Purl. I have lots of great embellishment ideas for these two threads for you to use on your projects. 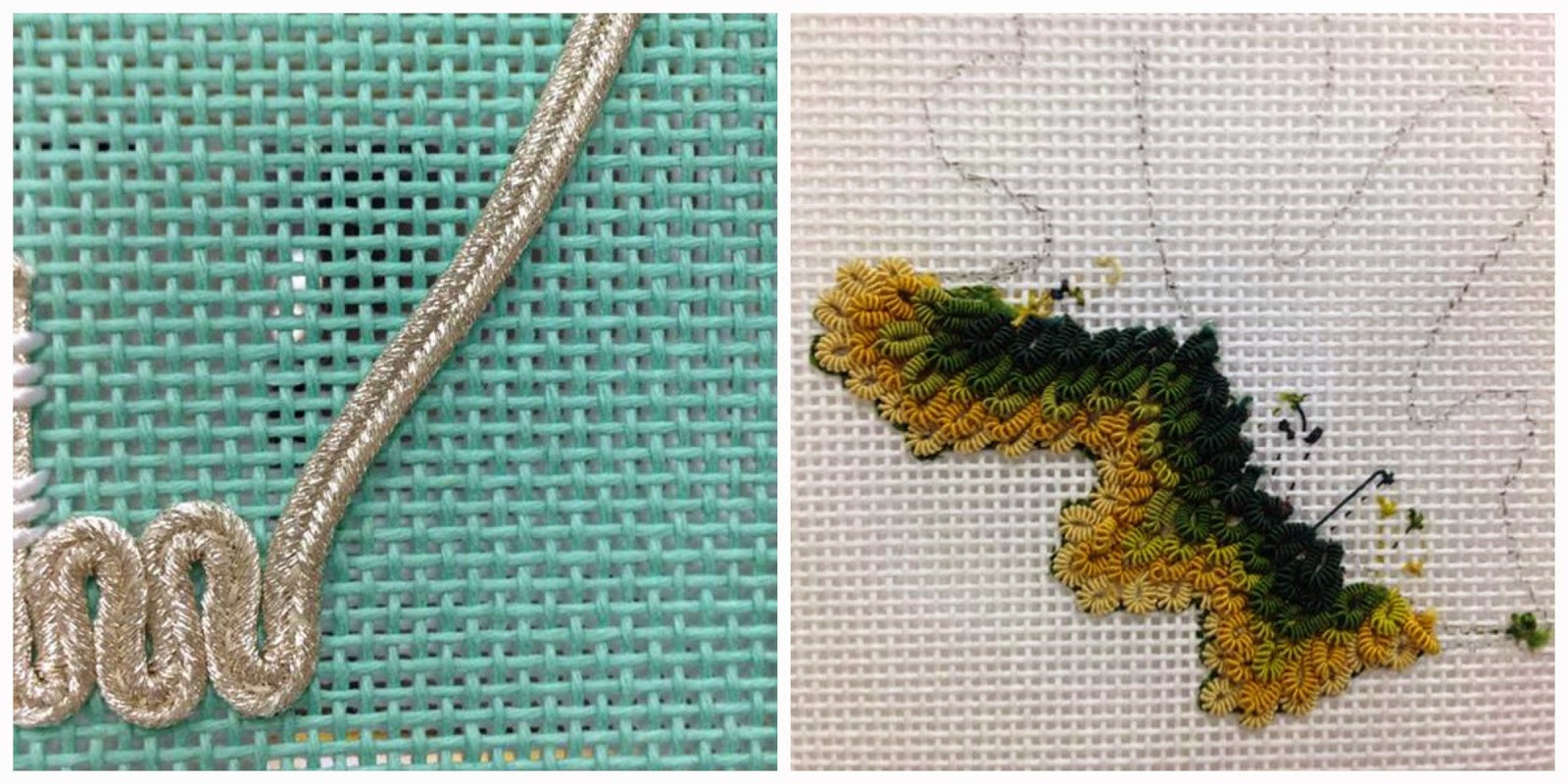 Have a great week. Look for this month's edition of The Covey in the next week to update you on classes. The Quail's Quill will be out May 22 for you to enjoy. Susan
Posted by Unknown at 6:00 PM No comments:

Look at these great small Japanese Embroidery projects. You can choose from one of the four season themed designs. The size is perfect-a 6" circle or the size of a CD. Here is a perfect piece for those who want to learn but do not want to invest in a large design. Jut a great way to learn the basics of Japanese Embroidery which will make you a better needlepointer. Our next class is June 26-30 all levels , so come join the fun! 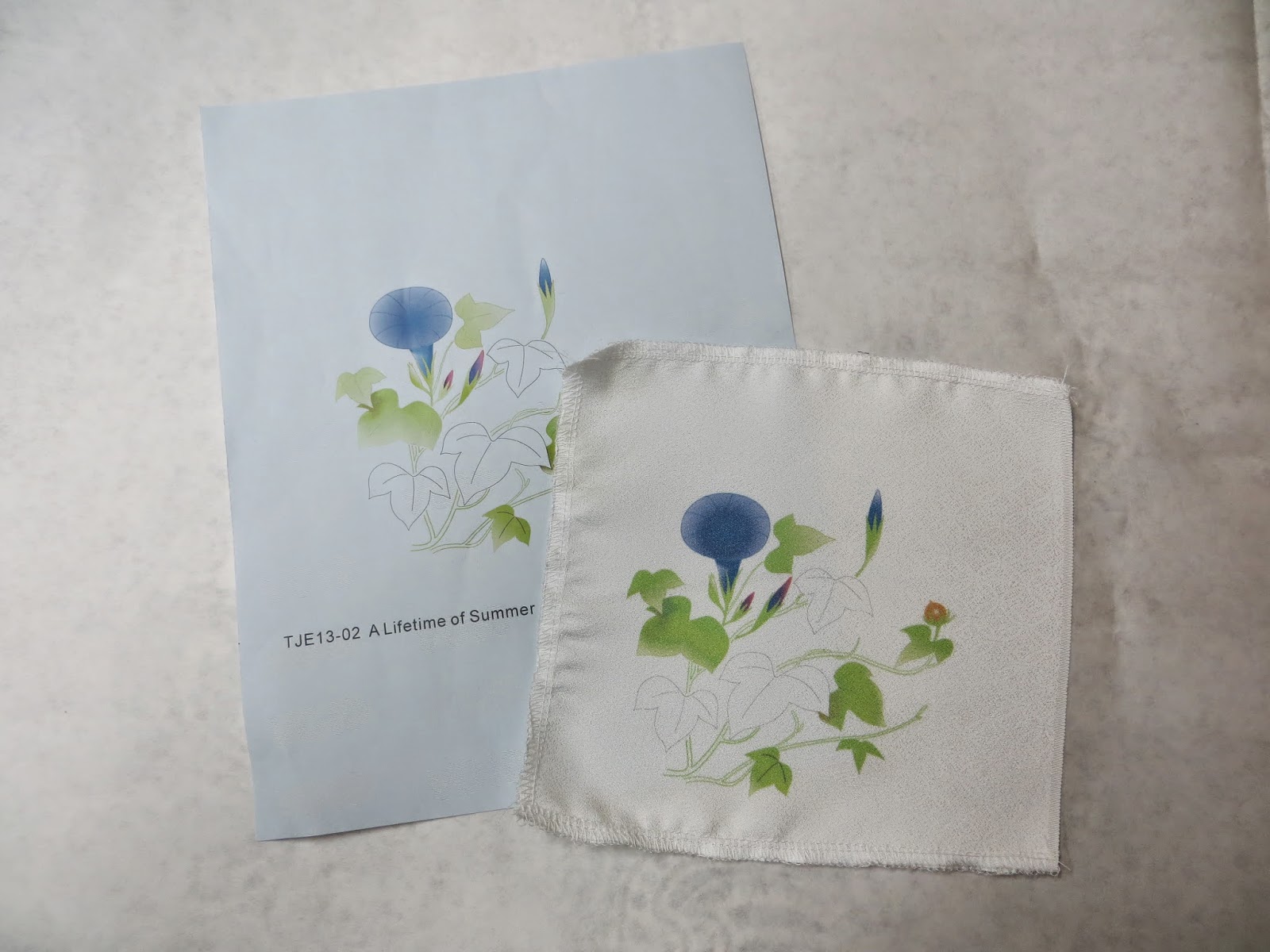 Sunday Sampler on "Read My Pins"

I just wanted to remind everyone that this exhibit is coming to an end on April 20, 2014.
The museum overview states
"When former Secretary of State Madeleine Albright vocally opposed Sadaam Hussein’s unwillingness to comply with UN inspections, government-owned Iraqi newspapers called her an “unparalleled serpent.” When Secretary Albright was next scheduled to meet with Iraqi officials, she reached into her jewelry box and selected a gold pin featuring a serpent coiled around a branch, and the legend began. Throughout her career as UN Ambassador and Secretary of State under the Clinton Administration, Secretary Albright used the colorful, attention-grabbing pins she had amassed to quietly communicate volumes. Now, that incredible collection of pins, including antiques and fine jewelry pieces alongside costume jewelry by unknown designers, will make its way to Phoenix Art Museum. The exhibition, which first premiered at New York City’s Museum of Arts and Design, features more than 200 pins, each selected by Secretary Albright to communicate a message or a mood during and after her diplomatic tenure. From fish to flags, jewel-encrusted hearts to pins honoring suffragettes, this collection reflects the unique style and brilliant personality of a woman who learned to leverage every avenue of communication in the fine art of diplomacy."

Lots of color, texture and ideas for using beads when you see these pins- so do take the time to view this exhibit. 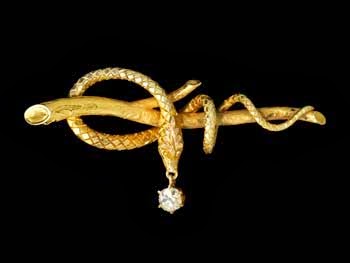 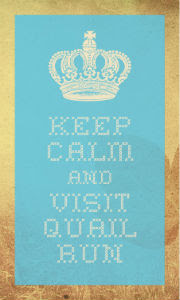 This blog was created to share information about all things needlepoint. Please call or email Quail Run Needlework if we can help you with any item or question. Enjoy!